By: Ra neth
Property Asia
Phnom Penh: The land prices in the area of the Ring Road 3 (the Third Ring Road) or 30 Meter Road that is currently under construction is priced between $200 and $250 per square meter as the land price, before the announce of the road construction, in the same area were worth between $20 and $25 per square meter, experts say.
Mr. Keam Seaklong, CEO of Century21 Dream Property, said recently that the third ring road in some areas used to be farmland and the price was not expensive, but since its construction of the road announced, it has pushed land in the area to reach from $200 to $250 per square meter.
“When there was no road, it was farmland, it cost about $20 to $25 per square meter, but when the ring road construction announced the current land price is between $200 and $ 250,” he said.
Mr. Seaklong said that investment in the land sector is such a lucrative opportunity, but must invest in developed areas such as land on the Third Ring Road. “The longer the purchase, the higher the price because we see development in the area,” he added.
Meanwhile, Mr. Dith Channa, CEO of Lucky Realty, said that land prices along the Third Ring Road will increase by 15 to 20 percent in 2020, despite the Covid-19 crisis.
He said that along this road, many projects have been started to develop, such as shops, factories, industrial areas, warehouses and houses, which caused the price of land there to increase after all these projects are coming out.
According to Mr. Channa, the land on the Third Ring Road is divided into four areas: the area between the Prek Pnov Bridge and National Road 4, with an average price of $200 and $250 per square meter. Land along the area between National Road 3 and 4 is priced between $150 and $200. Land from National Road 3 to National Road 21 starts $100 from $150 and from National Road 21 to National Road 1 ranges between $50 and $100.
He added that as Phnom Penh expands, land prices along the Third Ring Road will increase accordingly.
The 53-kilometer ring road is connected to National Road No. 6 to National Road No. 4 to National Road No. 3, No. 21 before crossing the Bassac River to National Road No. 1 was being built in four sections. The 25-meter-wide road will cost about $273 million, financed by a Chinese concession and a contribution from the Royal Government of Cambodia. The construction of this road started on January 14, 2019 and is scheduled to be completed by the end of 2021.
The Third Ring Road is an important road to reduce congestion and facilitate traffic in Phnom Penh. In addition, the interconnection and integration of special areas connecting the ASEAN Highway and the major economic corridors of the Greater Mekong Subregion contribute to facilitating cross-border transport, promoting international trade and turning the area into a development area. 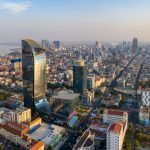