Five condominium projects were completed in the first half of 2021, adding 1,273 units to Phnom Penh’s supply, raising the total to more than 27,000, at 90 developments, according to a new report published on July 6.

CBRE Cambodia, the local affiliate of US commercial real estate services and investment firm CBRE Group Inc, said in the report that the Covid-19 pandemic, which has immobilised most of the world for more than a year, has sapped the performance of a Cambodian condominium market heavily reliant on international customers, eroding sales and rental prices.

The real estate firm categorises condominium projects as “high-range”, “mid-range” and “affordable” – all of which logged declines in sales prices for the first half of this year over July-December 2020.

It said the price of “high-end” condominium units averaged $2,802 per sqm in January-June this year, down 6.2 per cent compared to the second half of 2020.

“Affordable” units on the other hand averaged $8.40, up seven per cent from the second half of last year.

Kim Kinkesa, senior manager of research and consulting at CBRE Cambodia, said the overall drop in prices was mainly the result of Covid-19 disruption.

Unlike in 2020 when local infections were relatively under control, the wave of a community outbreak earlier this year made it even harder for developers and sales agents to reach out to buyers, she said.

“Concerns over health and safety have also discouraged visitors to showrooms and sales offices,” she said.

CBRE Cambodia said prices are likely to stabilise in the next six months, following the slowdown in new launches seen in the first half of 2021.

This, it said, would give the market some time to absorb the remaining supply.

By the end of this year, the widespread vaccination rollout could start showing its effects and regain some investors’ confidence as well, it added.

It estimated that in July-December, the capital would see 12 condominium projects comprising a total of 6,636 units completed and offered to market.

According to a Ministry of Economy and Finance report on socio-economic trends released early this month, the government approved 1,823 construction projects in January-May, down 13.23 per cent from 2,101 in the year-ago period.

Khmer
Quietly, the bridge across the Bassac River in the construction project of the third ring road is about to be completed 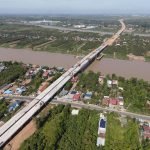